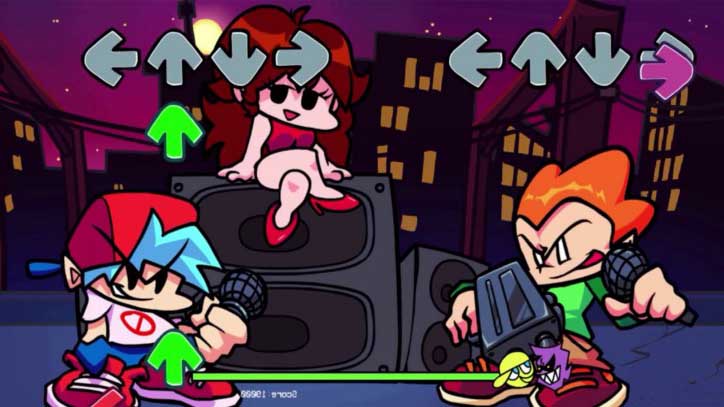 Friday Night Funkin is a free-to-play and open-source rhythm game developed by a team of four Newgrounds users. The game has a play style reminiscent of Dance Dance Revolution and PaRappa the Rapper with an aesthetic reminiscent of Flash games popular in the early to mid years 2000 on platforms like Newgrounds.

The game revolves around the player's character, just named “Boyfriend”, who has to overcome a series of characters in singing and rapping competitions for him to be able to date his love interest, “Girlfriend”.

Friday Night Funkin is a rhythm game, in which the player has to go through a lot “weeks”, each of which usually contains multiple songs. A player usually faces a different opponent each week.

The player can also play in the mode “free play”, where the structure “week” and any cutscenes are ignored, and the player can play each single song alone.

Week 1
Week 1 (titled “Daddy Dearest”) includes songs “Bopeebo”, “Fresh” i “Dad Battle”. The player takes on the role of a blue-haired boy called “Boyfriend” (often abbreviated to “BF”), who wants to date his girlfriend (similarly abbreviated to “GF”), but her father, former rock star known as “Daddy Dearest”, he disapproves of their relationship. The boy has to convince her father, to let him date her thanks to his musical talent.

Week 2
Week 2 (titled “Spooky Month”) includes songs “South” i “Spookeez”. How To Pump And Skid Celebrate A Spooky Month, I come across the girlfriend of her parents' house and the monster (just named “Monster”) he wants Skid and Pump to bring the Girlfriend over to be his “special treatment” and challenge the Boyfriend to win the Girlfriend.

Week 3
Week 3 (titled “Pico”) contains songs “Pico”, “Philly Nice” i “Blammed”. After being humiliated in the first week, Daddy Dearest hires a hitman, named Pico, to kill “unknown destination”. However, upon arrival at the scene, he realizes, that target is boyfriend, who knew before. Deciding to spare his life, Pico instead announces a rap battle.

Week 4
Week 4 (titled “Mommy Must Murder”) contains songs “Satin Panties”, “High” i “M.I.L.F”. The boy has to face the girl's mother, known simply as “Mama”. Week 4 takes place on the roof of several limousines with devils dancing in the background.

Week 5
Week 5 (titled “Red Snow”) includes songs “Cocoa”, “Eggnog” i “Winter Horrorland”. Week 5 takes place in a mall, apparently during Christmas, where the boyfriend has to fight the girl's parents, who took the Santa's chair hostage in the mall, holding it at gunpoint.

Development
Ninjamuffin99 and his three friends from Newgrounds (Dave artists “Phantom Arcade” Brown i evilsk8r, and the composer Isaac “Kawai Sprite” Garcia) initially created Friday Night Funkin as an application to Ludum Dare 47, by posting an online demo in the Week 1 with just two songs. The demo was unexpectedly successful, which led to many requests for the full game to be released. Ninjamuffin99 said, that he was planning to expand the game from the beginning and thought of Ludum Dare as a prototype, not the game demos.

Ninjamuffin99 posted a new build on Newgrounds (and later on Itch.io) 1 November 2020 year, which added a new title screen and accompanying song, menu, free play mode and story, tutorial, updated end game screen, pause menu, debugging mode, song “Dad Battle” in the week 1, updated boy and week icons 2. Interest in the game grew, and it has become the top rated game in Newgrounds 25-year history. The game has also received considerable attention through trends on platforms such as YouTube, Twitter, TikTok i Twitch. The game has an active modding community thanks to the open source release, which allows the implementation of fan-generated content.

His soundtrack, by the composer Kawai Sprite, was made available for free on Bandcamp and Spotify.